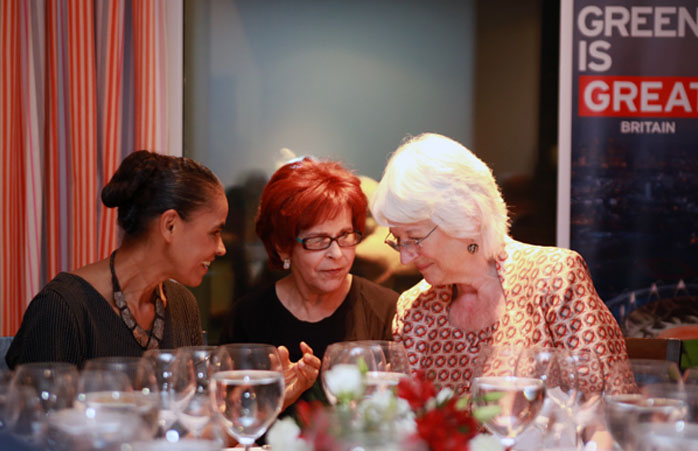 When I was in Brazil earlier this year to promote the Portuguese version of The Positive Deviant I had dinner with Marina Silva, then considering whether or not to join the Brazilian Socialist Party as running mate to its Presidential candidate Eduardo Campos in this October’s elections.

Subsequently, she decided yes, and after Campos died in a plane crash last month became not only the party’s candidate for President but also expected to beat the incumbent, Dilma Rousseff, in the second round of voting. Marina’s popularity stems from her reputation as a principled politician and activist. But can her principles win through in a country where the dividing line between pragmatism and corruption is hazy at best? A question that has exercised leaders for millennia.

Only late in the day did the campaign to keep Scotland in the United Kingdom remember that visionary storylines excite while the practical realities of their implementation do not. It forgot one-time governor of New York, Mario Cuomo’s lament that “you have to campaign in poetry but govern in prose”. As a lawyer and Senator, US President Barak Obama surely knew this from day one. Although judgement on his governing prose may not be in yet, without the poetry of his hope-stirring campaign, it is unlikely he would have been elected.

Marina Silva offers a new political leadership strategy. She has been careful to campaign in ‘prose poetry’. The poetical feeling is there, but in the prose of well-considered and mostly moderate propositions that are deeply rooted in her commitment to protecting the environment and social justice. If elected she says she will avoid the usual coalition horse-trading. Instead of policy negotiations behind closed doors, instead she will seek to win support on a case-by-case basis, using social media to encourage citizens to help her convince their elected representatives. Comfortable with the logic of her proposals, Marina outperforms her opponents on TV debating programmes and confounds the polls by attracting support across age, education and income groups.

Part of her popularity is down to her track record. Marina held a Senate seat for the Amazon state of Acre for 16 years with former President Luiz Inácio Lula da Silva’s (Lula) Workers’ Party (which she co-founded) and as Lula’s Environment Minister persuaded all Ministries to support her programme to halt deforestation in the Amazon. When she resigned in protest against other government policies that directly contradicted her objectives, her integrity was rewarded by a 20% vote in the next Presidential elections (though not enough to go through to the second round).

When we met, we talked a lot about the challenges and strategies for executing power in an ethical way, especially in the ill-suited systems we have around us. And how to stay true when the objective is a radical reprioritisation in favour of the environment and the least well off. I found a very reflective and realistic woman, glowing with compassion and commitment.

She campaigns in a Brazil fed up with an unhealthily compromised political process and thus ready to give the principles of Marina Silva a chance to fulfil the dream of Mario Cuomo (and positive deviants) of a “government strong enough to use words like “love” and “compassion” and smart enough to convert our noblest aspirations into practical realities”.