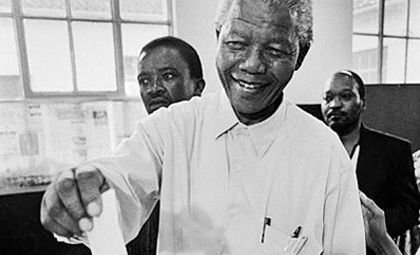 I never met Nelson Mandela. But for decades he has been an inspiring example of how important it is to prepare for power. Many lessons for ending unsustainable behaviour in ourselves, our companies, organisations and our governments are to be found in the story of the people who ended apartheid in South Africa.

Here are just a few.

Mandela knew from the start that wisdom is the product of learning combined with reflection and experience. And that the capacity to make wise judgments is essential for anyone aspiring to power. However, it was not a solo decision to make ending apartheid his personal goal, while ensuring the ANC was able to go on and take on governing the country after the defeat of apartheid. It was a carefully constructed strategy by the leadership group of the ANC and was explained to me during a long train journey in the 1980s with Mandela’s dearest friend, Oliver Tambo – a major leadership figure in his own right. Our conversation convinced me that leadership is the essential ingredient for success in any venture.

For example, Tambo understood the importance of the personification of power, and that Mandel should be that person. So in prison Mandela prepared for the role, using modesty, charm and a sense of humour to ‘make no enemies’. He practiced burying rancour and going beyond forgiveness in his dealing with prison guards, and used it later with heads of state in a way that added to his power, rather than diminished it. Thus Mandela could insist to the SA government that ‘only free men can negotiate; prisoners cannot enter into contracts’. Later he could promise Mr Botha he would not be humiliated at the peace and reconciliation hearings, and put Mrs Thatcher, not a fan of the ANC (a ‘terrorist organisation’), at her ease.

Mandela consciously prepared himself for power. As did the ANC.

Tambo explained too the ANC strategy of preparing black Africans for the moment when they would be free – equating the freedom that came with knowledge to that of responsible engagement in civil society and its governance. Young ANC activist Chris Hani was given the task of inspiring young black Africans to go to school. While in prison, Mandela organised a ‘university’ whereby prisoners taught each other what they knew. Ignorance fed fear and the consequent response of discrimination, Tambo argued, and ending ignorance was the intervention point in this negative cycle. Although not yet in power when we met (the ANC was ‘unbanned’ in 1990) Tambo was already thinking about succession.

The obituaries and tributes to Mandela note, as he did himself, that he was not a perfect human being. He was good enough, however, and he grasped perfectly the power of an image to make a point – unable to stop himself from dancing even on formal occasions, wearing a SA rugby jersey, standing with Stephen Lawrence’s parents in London. Mandela probably never intended to hold the Presidency beyond one term. As planned, the building of a post-apartheid South Africa would be down to others. Mandela understood a cardinal rule of personal power: the moment you – or your followers – think you may be indispensable is the moment to hand over power.

In many ways the shift from an unsustainable way of life to one that has as its purpose the enhancement of natural, human and social capital is even more momentous than that of ending apartheid. The focus is more diffuse; it is harder to decide where to concentrate, what to do and in what order. But the anti-apartheid campaign shows how important it is to have a plan around which to negotiate with those who have most to lose, the power of modest and graceful but strong personal leadership (in public and behind the scenes), and how all will be for nothing if there is not a succession of people who have learnt that living sustainability is the most normal and sensible thing to do.

As Nelson Mandela said ‘there is no passion to be found in playing small’. So in celebration of his life, let’s learn from him and play big for sustainability.