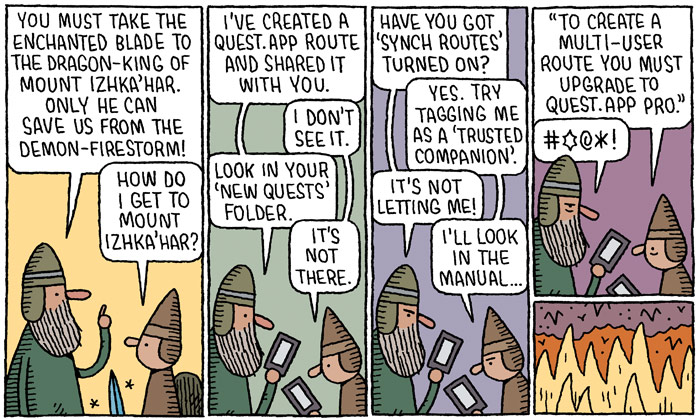 Is our confidence in the internet as saviour for most, if not all, things unsustainable crumbling? Possibly yes. But read about solutions to problems ranging from climate change to neighbourhood networking and it seems a given that the internet will be involved.

Distant monitoring of electricity or water helps alerts if overuse is spotted, a local meeting can be scheduled in a trice. And we love pictures of Somali farmers checking prices on their mobile phones before taking their cattle to market.

Moreover, much of our life is relocating into the ether. Banking, shopping, books, exchanges with friends, family, even complete strangers. It makes so much sense, and saves so much time and money. The path to a low-carbon, sustainable future is so obviously paved with e-innovation and an app to guide you every step of the way.

The internet (the technology) and the web that organises all the data – for apps, emails, YouTube clips, Facebook pages, Netflix uploads, digital libraries and so on that populate and whizz round the internet – are signalling limits to a growth in use that most of us thought was infinite.

First the amount of energy it all uses. Global estimates vary from 2% to 10% per year. There is a tiny bit of renewables in there, plus efficiency attempts through locating data centres in icy caves. But what matters is that this total is growing rapidly and the whole set up remains shockingly inefficient. It is thought that only 12-16% of energy drawn from the grid by the system is used for computation, the rest goes to cooling or to keeping the kit on standby ready for any surge in use.
As well as the soaring energy costs of the infrastructure, highly dependent businesses and governments are fretting that the internet is simply getting too full, slowing or simply stopping as it did for eBay in early August. Despite increased connectivity there is just too much ‘content’ travelling or sitting about. Netflix and YouTube now accounts for more than half US internet traffic.

And that is before all our fridges, lights and washing machines are plugged in or, indeed, the currently unconnected 4.5 billion mostly poorer people join the e-party. Although it is 20+ years since the first non-computer or data centre ‘thing’ (a coffee pot I think) was connected, the Internet of Things only recently became the most hyped technology, taking over from Big Data.

With those sorts of time lags no wonder the even bigger news is that interest in the technology is being replaced with questions about what it can actually do and how simple it is to use. Because unless it is easy to use your water or energy saving app not only to get information but also to do something about it most people just won’t bother.