If the nub of the sustainability challenge is to shift from an economic logic based on more people consuming more stuff to one that flourishes through fewer people consuming less stuff, then we are not getting on very well.

If the nub of the sustainability challenge is to shift from an economic logic based on more people consuming more stuff to one that flourishes through fewer people consuming less stuff, then we are not getting on very well.

As a selection of top politicians, business leaders and film stars gather in Davos to examine whether pressing hard on the pedal of the same logic that has brought us environmental mayhem, inequality on a criminal scale and a financial system drowning in debt was indeed stimulating renewed economic growth, confidence was obviously fragile. As Adair Turner, recently a candidate for Governor of the Bank of England put it, the cocktail of economic stimuli being knocked back by the UK economy was a bit like using the ‘hair of the dog’ (another slug of alcohol) as treatment for a hangover!

What is most striking is the lack of imagination and innovation around how things might be done differently. How else to explain the revival of securitisation, the poisonous soup of repackaged debt sold on as assets which triggered the financial heart failure of 2008?

It is not as if there are no great ideas around about how we might run the economy – and the financial system – differently around. On the contrary there are many. Some of the latest and most interesting are listed at the end of a recent Comment by Robert Constanza and some colleagues in the January edition of NATURE. The main target of the article, though, is the persistence of government in using GDP growth as the primary goal of policy, when there is a high level of agreement that it is dangerously inadequate. 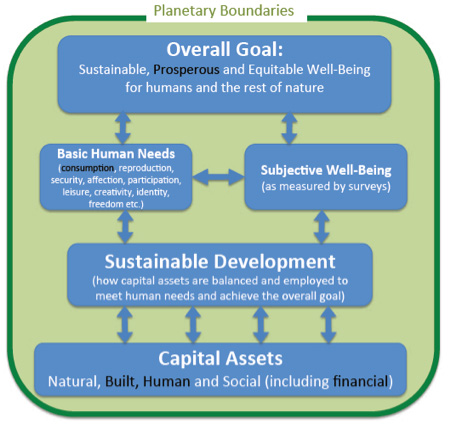 As this diagram, taken from the article, shows, only the black items are (and then only partially) picked up by GDP. The things we say we value most are not included – presumably safe supportive communities and a healthy environment are nice to have but not essential to national success? We could hardly want more evidence that they are not automatic trickle-downs from how the economy works at the moment.

The Constanza article majors on some of the many candidates for new ways of measuring quality of life, and speculates that the reason GDP remains entrenched is not just vested interests (though the coal industry scuppered Bill Clinton’s modest stab at ‘green’ GDP measures) but also bamboozlement in the face of too much choice. The solution, he says, is a process to build a consensus around some comprehensive measure via the UN Sustainable Development Goals, under construction now for 2015.
In the meantime, I would argue, there is nothing to stop anyone getting on and innovating around building those capital assets, especially the ones in white on the diagram. Personally I would have human capital in white too. It mostly represents education, which is important of course, but insufficient unless if not geared to preparing generations sustainability literate citizens.